Honouring the Ways of our ancestors

The Cree and Innu Nations sign a traditional understanding built from the customary values of sharing, sustainable harvest and respect for the caribou 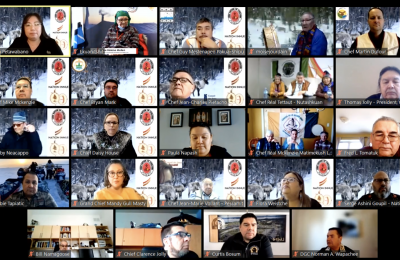 Today marks a historic moment where two Nations revive the ways of our ancestors who have survived through scarcity and hardship by following the trails of the caribou.

In honor of our ancestors and their teachings of the sacred values of sharing and respect for the animal, the Cree Nation of Eeyou Istchee and Innu Nation of Québec have joined together to sign a MAAMUU NISITUHTIMUWIN / MATINUEU-MASHINAIKAN ATIKU E UAUINAKANIT which translates to ” mutual understanding “.

“I am proud of today’s signing as we continue to demonstrate stewardship to the land and to the animals as our Ancestors have always practiced. I would like to thank our Elders, tallymen and land users for their invaluable wisdom, knowledge, teachings and guidance. I would also like to thank the Cree Nation Government for their many years of hard work that resulted in this historic event. Eeyou and Innu are embarking on a journey that will revive mutual understandings and respect to ensure that caribou are preserved and supported to thrive.”

Since time immemorial, the Cree and the Innu have shared relations between one another and with the caribou. Over the years, discussions between the Cree and Innu have led to solutions to provide access to caribou for the Innu people while ensuring that the interests and concerns of our respective Nations are considered, and that the health and sustainability of caribou are prioritized.

“We have responded to the request of our Elders who have requested during their gathering of 2019 that we come to an understanding of sharing that would take care of both the caribou herds and our cultural identity through the traditional caribou hunt (atiku). For us, this community hunt will not only meet a need of our Elders’ food security, but also perpetuate a sharing relationship that dates back to time immemorial.”

“Although the more abundant Leaf River herd can enable some access to caribou, the herd still remains vulnerable. We must be very cautious and continue our collaboration to make sure that our harvest is managed sustainably. This work that we are seeing here today come to life in the form of a common Understanding between our two Nations began with the UPCART in 2013. I am delighted to see the results of these efforts and am proud to stand with our hunters, tallymen, and land users who have carefully guided our discussions.”

In the last decade, the many Indigenous nations that depend on caribou for their food security and the preservation of their culture have been significantly impacted by the decline of caribou populations, especially those depending on the George River herd – last estimated in 2020 to have dropped to 8,100 animals.

The Nations share the same preoccupation concerning the decline of the Caribou populations and are confident that the Traditional Mutual Understanding will be helpful to protect the herds in critical state such as the George River Herd, and boreal caribou herds, and ensure a sustainable harvest from the Leaf River herd shared between our Nations.

In 2013, several Indigenous nations gathered to create the Ungava Peninsula Caribou Aboriginal Round Table (UPCART) and developed a strategy for the conservation of Ungava Caribou. This strategy entitled A Long time Ago in the Future: Caribou and the People of Ungava was released in 2017 and identified several priority actions including actions to determine how a limited sustainable harvest can be shared amongst Indigenous Nations in times of scarcity.

The Maamuu nisituhtimuwin/ Matinueu-mashinaikan atik u e uauinakanit establishes mutually agreed upon terms by which Innu communities in Québec will be able to access caribou within the Cree traditional territory of Chisasibi, Eeyou Istchee. The Understanding, shaped by the wisdom and knowledge of our elders, outlines a framework inspired by the traditional customs and values of our ancestors. This framework is built on the core principles of sharing, sustainable harvest, and respect for the animal.

Among other measures, the Understanding establishes an authorization process whereby only the local authorities may act to officially authorize, by means of an official letter of consent, the hunting activities. This process also includes the stewardship role of the tallymen concerned in Eeyou Istchee. It is important to outline that only a community caribou hunt authorized through the procedure of the Understanding will be accepted by both the Cree and Innu Nations.

• the hunting area defined on the Cree traditional territory (Chisasibi);
• a total allowable harvest limit of 300 caribou for the winter season of 2021-2022 to be shared amongst the nine Innu communities;
• the respect of traditional customs and values so as to ensure the utmost respect for the animals, the environment and the safety and security of individuals;
• the purpose of the caribou harvest which shall be for ritualistic, cultural, educational, communal and sustenance purposes and not for the purpose of sales or any act that may be for the purpose of monetary profit;
• the animal whereby in accordance with traditional customs and values, all parts of the harvested animal shall be used; no wastage shall be left behind; no unnecessary or prolonged chasing of the animal will be accepted,
• the security and safety of hunters and individuals including the use of proper firearms;
• prior authorization for use of camps, except for emergency purposes and in such case must be reported;
• the obligation to be accompanied by a Cree person determined by the Chisasibi local authority or concerned tallyman;
• the reporting of harvesting activities.