The Grand Council of the Crees (Eeyou Istchee) / Cree Nation Government extends its deepest congratulations to former MP Romeo Saganash for being awarded the prestigious Doctor of Laws Honoris Causa from Laval University to be received in an official ceremony in March 2020. 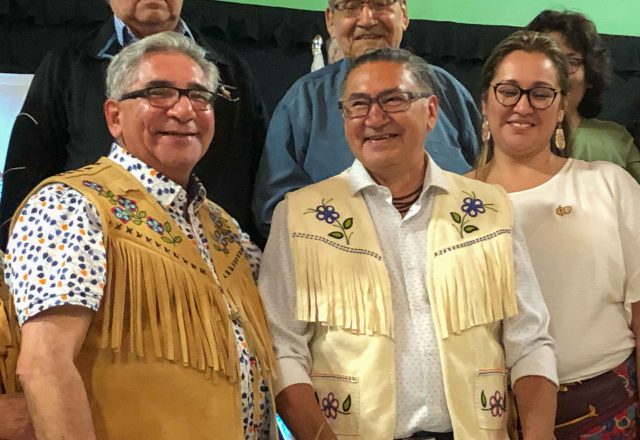 As a recipient of this highest honor awarded by the University, former MP Romeo Saganash is being recognized for his many contributions towards national reconciliation and to Canadian society.

“We recognize Romeo’s diverse and longstanding contribution to the Cree Nation and Indigenous Peoples across Canada and the world, and his advocacy work on the UN Declaration on the Rights of Indigenous Peoples has been remarkable. It gives us great pride to know that he will be awarded this well-deserved honor. It was an honor for the Cree Nation to show him our gratitude for his many contributions during this year’s Annual General Assembly of the Grand Council of the Crees and even more of an honor to watch as other institutions recognize his journey towards justice and equality for Indigenous Peoples. We also wish to acknowledge the openness and the generosity of spirit on the part of Laval University in its decision to grant this prestigious award to Romeo Saganash.”

Recognizing a diverse and distinguished career

In 2011, Romeo was elected to his first of two terms as an NDP MP for Abitibi – Baie-James – Nunavik – Eeyou, the first Indigenous MP elected in Quebec. It was during this time that he tabled legislation, Bill C-262, to ensure that the laws of Canada respect the UN Declaration on the Rights of Indigenous Peoples. Although it may not have passed through Senate, C-262 continues to make headlines with British Columbia setting a Canadian precedence and adopting the model into their own provincial legislation.

In a distinguished career, Romeo became the first graduate of the Cree Nation of Eeyou Istchee to obtain a Bachelor of Law in 1989. Soon after in 1990, he was elected Deputy Grand Chief of the Grand Council of the Crees (Eeyou Istchee), helping to guide the Cree Nation through critical historic moments such as the Oka Crisis, the Meech Lake Accord and the Cree Nation fight against the Great Whale project—a massive hydroelectric project that would have flooded a huge portion of the Cree Nation’s traditional territory.

Serving for over ten years as Director of Quebec Relations and International Affairs for the Grand Council of the Crees, he worked tirelessly to advance the rights of Indigenous Peoples globally—work that eventually culminated in the drafting of the United Nations Declaration on the Rights of Indigenous Peoples.  Last year, the Cree Nation watched with pride as he addressed the House of Commons in the Cree language during a debate on Bill C-91, the Indigenous Language Act, a memorable moment for everyone in Eeyou Istchee.