Waskaganish 350th: A Year of Celebration

At the closing of a year long celebration. We would like to share with you a few of the highlights of the 350th anniversary of Waskaganish that make this a truly memorable occasion

As the birthplace of the Fur Trade and as one of the oldest settlements in Canada, Waskaganish remains one of the most historically significant place from which a continent was built. Today Waskaganish is a growing, vibrant community with an on-reserve population of approximately 2300 people. Cree is the dominant language spoken, although the younger generations are becoming fluent in English and French as well. Trapping remains an important contributor to the local economy as well as a source of cultural and spiritual values. Many consider the community and its territory as one of North-America’s premier destination for migratory birds. The region is well known for its waterways and prime fishing spots, hosting an annual canoe brigade every summer.

As a contemporary and dynamic place, Waskaganish and its people look forward to a prosperous future firmly anchored in Cree values, traditions, history and spirituality while remaining open to the world at large. 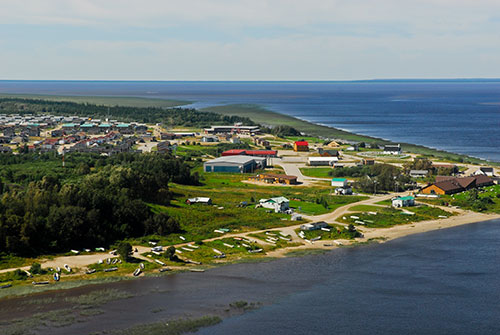 A Celebration for Every Season

The seasons were filled with celebrations that marked the occasion in a way that was truly in alignment with Cree way of life. Starting on June 16 until the final event on November 24 the community was filled with music, artistry and activities that promoted the spirit of a truly vibrant community. The event hosted delegates from across Eeyou Istchee including Grand Chief Dr. Abel Bosum, Chiefs from all Cree Nations and across Canada. The occasion was also met with well wishes from representatives from the Hudson Bay Company and Prime Minister Justin Trudeau among numerous others.

You can learn about Waskaganish’s history and see many beautiful photos from the celebration on Waskaganish’s website. On behalf of the Grand Council of the Crees (Eeyou Istchee)/Cree Nation Government we would like to once again extend our warmest congratulations to the Cree Nation of Waskaganish. Your celebration resonated across Eeyou Istchee as a moment of pride for all Cree people.

Learn More
X
Back to top