Please use the links provided to navigate the page 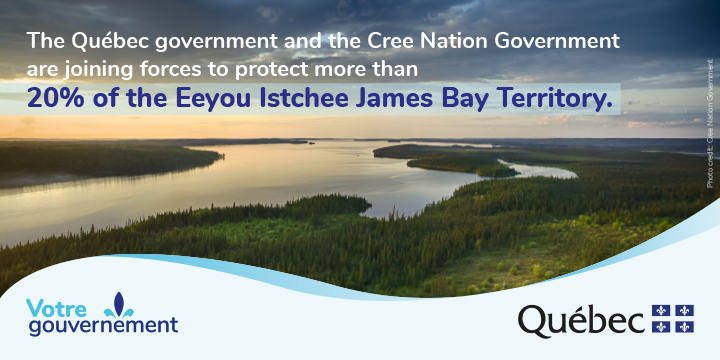 Through a unique partnership between the Québec government and the Cree Nation Government that the Grand Alliance embodies, the Québec government will protect more than 20% of the Eeyou Istchee James Bay Territory in the Nord-du-Québec region before the end of 2020. Indeed, 23 new territories reserved for the purposes of a protected area (TRPPA) were designated recently. Until now 12% of the Eeyou Istchee James Bay Territory was protected and the 23 new TRPPAs will bring to 23% the proportion of protected areas in the territory. The addition of the new territories brings the total to roughly 39 000 km2, equivalent to the area of Switzerland.

This marks a significant step forward for the Grand Alliance, under which biodiversity conservation and the protection of the Eeyou Istchee James Bay Territory, especially the establishment of an interconnected network of protected areas, are central to the social acceptability approach linked to future socioeconomic development projects. The establishment of the 23 new TRPPAs will benefit all stakeholders and confirm the mobilization of the partners involved in the protection of the territory while ensuring the predictability of economic and social development in the northern region.

Today’s announcement marks the beginning of the multi-stage approach that will lead to the granting of legally protected status to the territories in question. The inhabitants and users of the Eeyou Istchee James Bay Territory will be able to participate in the approach.

The following steps will be launched shortly:

The ultimate objective is to establish biodiversity reserves in the TRPPAs. In some instances, portions of the territory could receive the protected status of a national park.

The establishment in the Eeyou Istchee James Bay Territory of the new protected areas is enabling the government to contribute significantly to fulfilling its environmental and biodiversity conservation commitments both among its immediate partners and abroad.

Indeed, the Québec government committed itself to preserving by the end of 2020 17% of Québec’s land and freshwater territory in protected areas, 20% of them north of the 49th parallel. The latter objective was transferred to the Eeyou Istchee James Bay Territory during the regional planning process of the network of protected areas for this region. Consequently, the new designations add 2.6% to Québec’s network of protected areas in the terrestrial and freshwater environment, for a total of 15.8%, equivalent to a 3.3% increase north of the 49th parallel, thereby contributing to the attainment of Québec’s objectives in this respect.

“This unique approach that we are highlighting today allows for the conservation of outstanding natural environments in the Eeyou Istchee James Bay Territory and the preservation of its cultural values. It stems from a unique Nation-to-Nation partnership under the Grand Alliance. I would like to thank all our partners who have facilitated this positive outcome. Together we are not only protecting outstanding territories in the Nord-du-Québec region but also contributing to the attainment of Québec’s objective of protecting at least 17% of its land and freshwater territory before the end of 2020.”

Benoit Charette, Minister of the Environment and the Fight Against Climate Change and Minister Responsible for the Laval Region

“It is through a sustained effort and significant collaboration with all the partners that we have achieved balanced consensuses that enabling Québec to establish a network of protected areas to protect biodiversity while limiting the impact on Québec’s economic potential. I am especially proud of the collaboration established between the Québec government and the Cree Nation Government and with the partners from the Jamesian communities, which has enabled us to attain the targeted proportion of protected areas in the Eeyou Istchee James Bay Territory. By continuing to work together, we will pursue the territory’s balanced development in keeping with the perspective of its residents. Québec is thus continuing to demonstrate its leadership and pragmatism in the realm of sustainable development and offering, at last, predictability in the realm of economic development for the region.”

Jonatan Julien, Minister of Energy and Natural Resources and Minister Responsible for the Côte-Nord Region

“The protection of these territories will foster the conservation of ecological components that are representative of the Eeyou Istchee James Bay Territory’s ecosystems and enhance the connectivity between the existing protected areas in synergy those in the network. Moreover, this will help protect key habitats for woodland caribou in the sector. This announcement illustrates the importance of partnerships between stakeholders in the Nord-du-Québec region for the harmonious development of the Québec network of protected areas.”

Pierre Dufour, Minister of Forests, Wildlife and Parks and Minister Responsible for the Abitibi-Témiscamingue Region and the Nord-du-Québec Region

“The efforts of the Québec government and the Cree Nation Government have produced admirable results in a very short time to consider both the attainment of targets concerning protected areas within the time frame stipulated and to implement the commitments stemming from the significant agreements concluded over time with the Cree Nation. The choice of territory to protect areas of ecological, environmental, and cultural importance for the Cree has been made with a paramount concern for balance. Our initiatives today will affect the next seven generations.”

“Today’s announcement is the result of many years of regular community engagements with land users and tallymen who guided this important announcement with their expertise. The Grande Alliance is about planning for an inclusive future of Eeyou Istchee, where sections 22 and 24 of the JBNQA take center stage. It is a new way of preparing the landscape so that development can happen in a way that makes sense for everyone, instead of the opportunistic exploitation of our resources. It is a way of creating a vision for the future where the Cree and the Jamesian communities feel valued, and encouraged to contribute to the future of Eeyou Istchee.”

Dr. Abel Bosum, Grand Chief and Chairperson of the Grand Council of the Crees

“This impressive accomplishment would not have been possible without the guidance from land users, tallymen, community leadership, as well as dedicated staff of the Cree Nation Government over the last 10 years. We are proud to announce the results that have come from a concerted effort by so many with the same objective: protecting our territory and the traditional activities of our people while providing a balanced and sustainable management approach of Eeyou Istchee. This collaboration with Quebec has demonstrated what is achievable when we work with common objectives and in respect of treaty rights and inclusion of all.”

Mandy Gull, Deputy Grand Chief and Vice-Chairperson of the Grand Council of the Crees