From the Musée de Lachine to the Aanischaaukamikw Cree Cultural Institute

In keeping with its new 2020-2025 Strategy for Reconciliation with Indigenous Peoples, and in hopes of strengthening its bond with the Cree Nation, Montréal has responded favorably to the request by the Grand Council of the Crees (Eeyou Istchee) to transfer the traditional Cree hood from the Musée de Lachine to the Aanischaaukamikw Cree Cultural Institute, its new conservation site.

The return of this traditional beaded hood was adopted today by Montréal’s executive committee and was announced publicly by Mayor Valérie Plante, the Grand Chief of The Grand Council of the Crees (Eeyou Istchee), Abel Bosum, as well as the mayor of Lachine, Maja Vodanovic.

“Today’s signature and the return of a traditional hood are strong actions that reflect the principles of the United Nations Declaration on the Rights of Indigenous Peoples, as well as the objectives of the Strategy for Reconciliation with Indigenous Peoples, namely aiming to establish government to government relations with one another. By retrieving this item that carries such an important historic significance, the Cree community will retrieve a symbol of its heritage and of the expertise of its ancestors, stated Mayor Valérie Plante.”

The beaded hood that will soon be headed to Eeyou Istchee, was created more than 170 years ago for Jane Gunner, the wife of the Chief of the Mistissini community. Women would wear this type of hood during ceremonies to highlight the return of an important hunt, or a wedding, for instance. This object carries cultural, heritage and spiritual value, and will be displayed at the Aanischaaukamikw Cree Cultural Institute, according to international standards for museum collections. 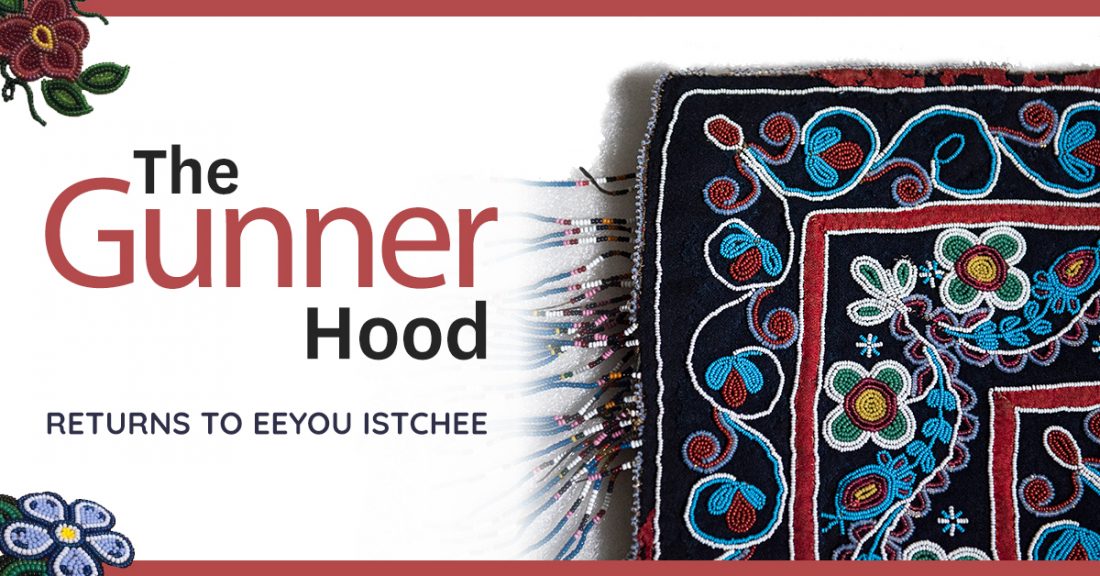 “Returning the hood to the Aanischaaukamikw Cree Cultural Institute is an important step towards ensuring that culture is carried forward to future generations and maintaining the traditional customs of our people. By showcasing in Eeyou Istchee elements of our cultural heritage and objects related to our customs, we enhance the interest of our citizens in learning more about significant aspects of their heritage. This initiative highlights the positive relations between Eeyou Istchee Crees, Montréal and the Musée de Lachine,” explained Abel Bosum, Grand Chief of The Grand Council of the Crees (Eeyou Istchee).

Made of wool, glass beads and cotton, the Cree hood has been kept for more than 70 years at the Musée de Lachine, after having been donated by a Montrealer. It underwent restoration some 15 years ago at the Centre de conservation du Québec. Its return to the Cree Nation coincides with the collections management policy of the Musée de Lachine, who adopted in 2019 a new mission to focus its collections on the history of Lachine and its territory.

“The return of this traditional hood recognized by the descendants of a prominent member of the Cree community when it was lent to the Aanischaaukamikw Cree Cultural Institute in 2016 reflects the close cooperation between the Musée de Lachine and Indigenous nations. We wish for the museum to maintain this close cooperation perpetually, and to foster these exchanges with all communities and nations,” concluded the mayor of Lachine, Maja Vodanovic.

Pictures and a short video about the hood are available upon request.